ABOUT
WORK
Riot Games, RAGE
JPEN
2022VCTStage2-ChallengersJAPANPlayoffFinalsMainTitle
2022.06.25
2022 VCT Stage2 - Challengers JAPAN Playoff Finals オープニング映像
play
JPEN
The production of the opening video for 2022 VALORANT Champions Tour Challengers Japan Stage 2 - Playoffs Finals.
This event was an official tournament of the Tactical FPS game VALORANT, hosted by Riot Games. It is the first ever offline tournament with an audience in Japan, and was held in Saitama Super Arena.
Breaking of Dawn
For a long time, Japan was not able to win any major titles in the international world of FPS.
This all changed at the Valorant Champions Tour 2022, held in Iceland, Reykjavik. In the first stage of the tournament, Japan won an impressive 3rd place. This left a great impression, garnering attention from not only players from Japan, but from the world as well. It was the breaking of dawn for eSports in Japan. Due to COVID-19, previous Valorant tournaments have been held either online or without an audience. As a result, these players have been fighting their battles with no direct words of encouragement or support from fans, while the fans were only able to watch these heroic moments through a screen. This offline in person tournament was a breaking of dawn for them as well.
“Light shining through, a hand reaching out for the fragment of dawn”
“Getting across the wasteland, we're moving to a new era. The dawn is near.”
We've kept the color centered around green, but to avoid being monotonic, we've added black and white to accentuate the contrast between cuts.
We've also focused our attention on various details such as the typeface used to show our respect towards the creative aspect of VALORANT and VCT.
We've referenced various factors of the game such as the abilities or skills of agents that appear in VALORANT.
“All the challenges we’ve faced. A destiny yet to come.”
“The harsh road to the world.”
To represent the intense back and forth in shooting games, overcoming the battle against covid-19, and finally being able to host an in-person tournament, we added more emphasis to aggressive sounds in the music.
Mysterious and dark in the beginning, we're expressing the determination and tension through adding pressure and spiritual sounds. Slowly heightening the tension, we let it explode right as the screen transitions into the main section, signalling the opening of the tournament. Since it is a tournament selecting the representative of Japan, we've taken chord progressions commonly used in traditional Japanese music. Additionally, we used a sampled sound from a traditional Japanese court music instrument called "Sho" in the bridge to the main section.
Time
Along with the concept "breaking of dawn", we've focused on "time" as well. In VALORANT, time is an important factor, with each round lasting about 2 intense minutes. When the round begins, both teams try to read each other's next moves. The design of the timer that appears on the screen is based off of Valorant’ in-game timer.
The videos and commentary used in the beginning are from the tournament "VALORANT Champions Tour 2022 Stage1 Masters Reykjavík" which took place 3 months ago. As the scene progresses, it slowly transitions into what was used in more recent tournaments, representing how we are moving towards the present-day.
Bare the Night
These past years, players have been finessing their powers in darkness, determined to take over the world some day. And now, it has been proven that it is possible. A new era emerges with light. Dawn is near, now's the time to show those fangs. From the phrase "uncovering the veils, baring the night", we are expressing the players uncovering the era of solitude and showing their hidden powers to the world. 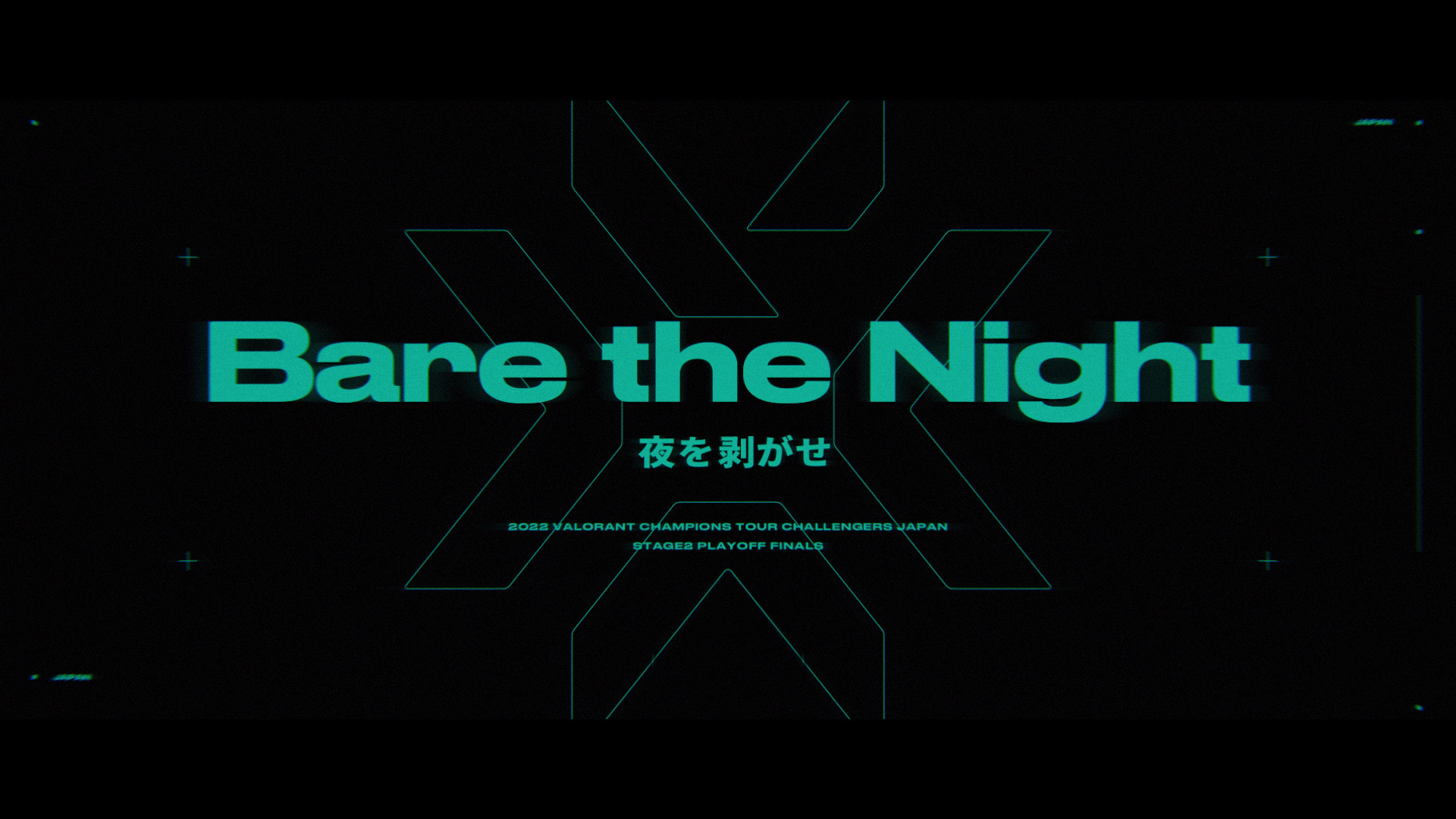